Having the ability to easily create reports and export your logbook is as important as being able to to log your flights fast and safely.

AvionLog has a detailed reports page that lets you track standard limits like FAR 117 and EU-OPS, track your own custom limits, monitor recencies such as landings or monitored approaches, predict targets and career milestones as well as giving you the flexibility to create just about any custom report you can think of.

Just like when starting a new flight entry, When on the reports page, tapping the '+' button in the top right corner will start the process of making a new report.

From Library - Track Your Limits - FAR 117, EU-OPS or Customize

No electronic logbook app would be complete without the ability to track your limits. To get you started with this AvionLog is pre-loaded with the FAR 117 and EU-OPS limits. Create a new report from the Library and select each limit you want to track.

You don't fly according to EASA or FAA limits or your company has specific restrictions? That's not a problem. Use the FAR 117 and EU-OPS pre-loaded reports as your starting point. Once you've selected the ones closest to your requirements, swipe left on the limit and select edit.

The pre-loaded reports make a great starting point for quickly building up the reports so you can track your custom limits.

Use the AvionLog Custom Reports to create just about any report you can think of. There are three main report types; Standard Reports for providing a detailed breakdown of your flying experience, Limit/Target/Rolling Reports for monitoring limits and targets and Recency/Currency Reports for tracking say 3 landings in 90 days, auto-lands, monitored approaches, night currency etc... and Duty Reports for everything non-flight related including simulators.

Use a standard report to get an hours breakdown exactly how you want. It could be as simple as using the Total Flight Time quick report at the top of the reports page or you might want to track time on a specfic aircraft type or selection of aircraft types, or by seat time such as time spent as P1/PIC. The reports you can produce are almost limitless. 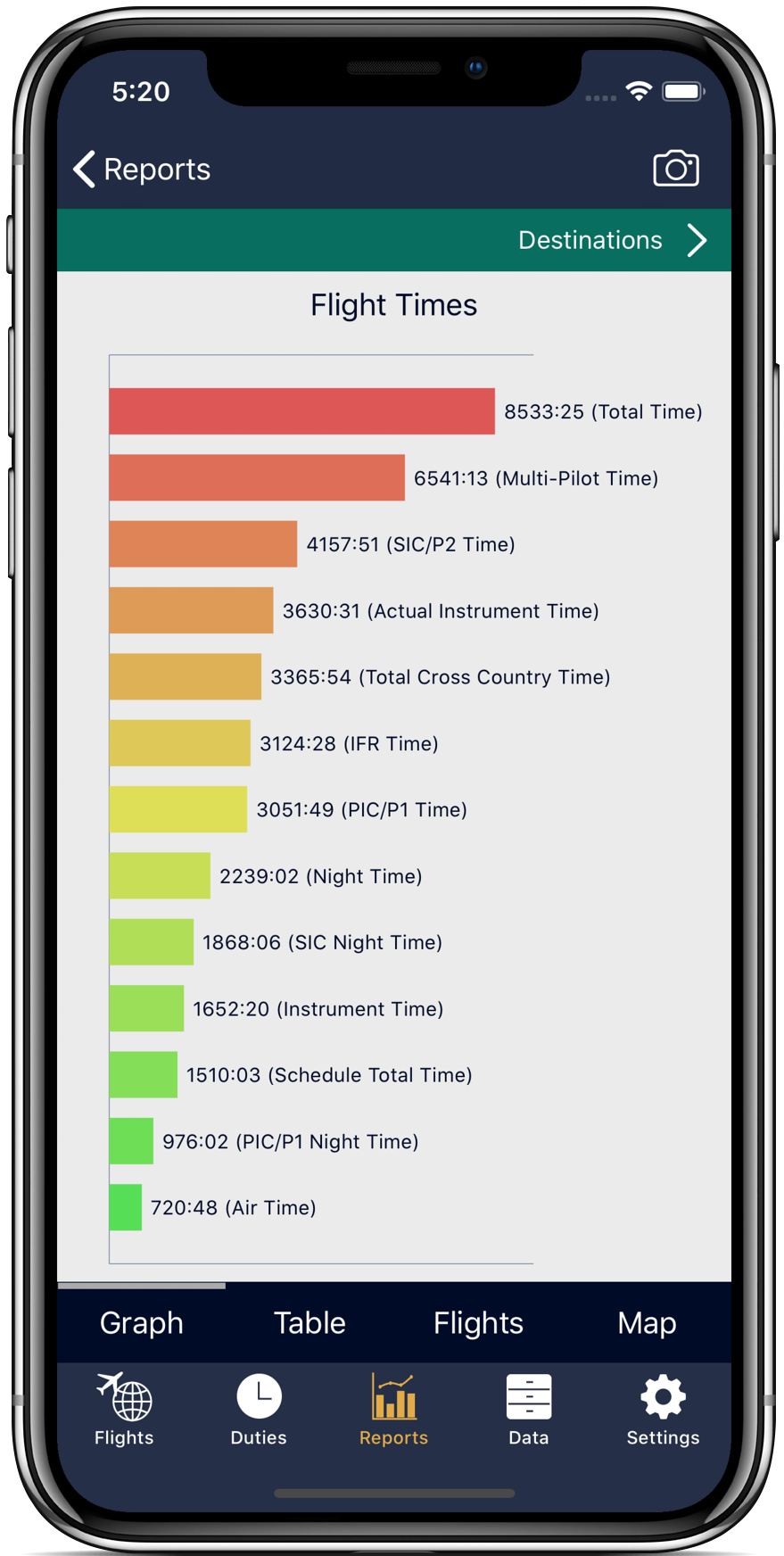 Keep yourself within a limit in a defined period, say 1,000 hours this calendar year, by using the limit report. Watch as you approach a limit and know you'll always be legal to fly.

For many pilots it's useful to know when certain hours are going to be achieved. For example, if you're awaiting command, need a certain amount of hours for that next job, for a licence or if you just want to know when you'll hit that next 1,000 flight hours. 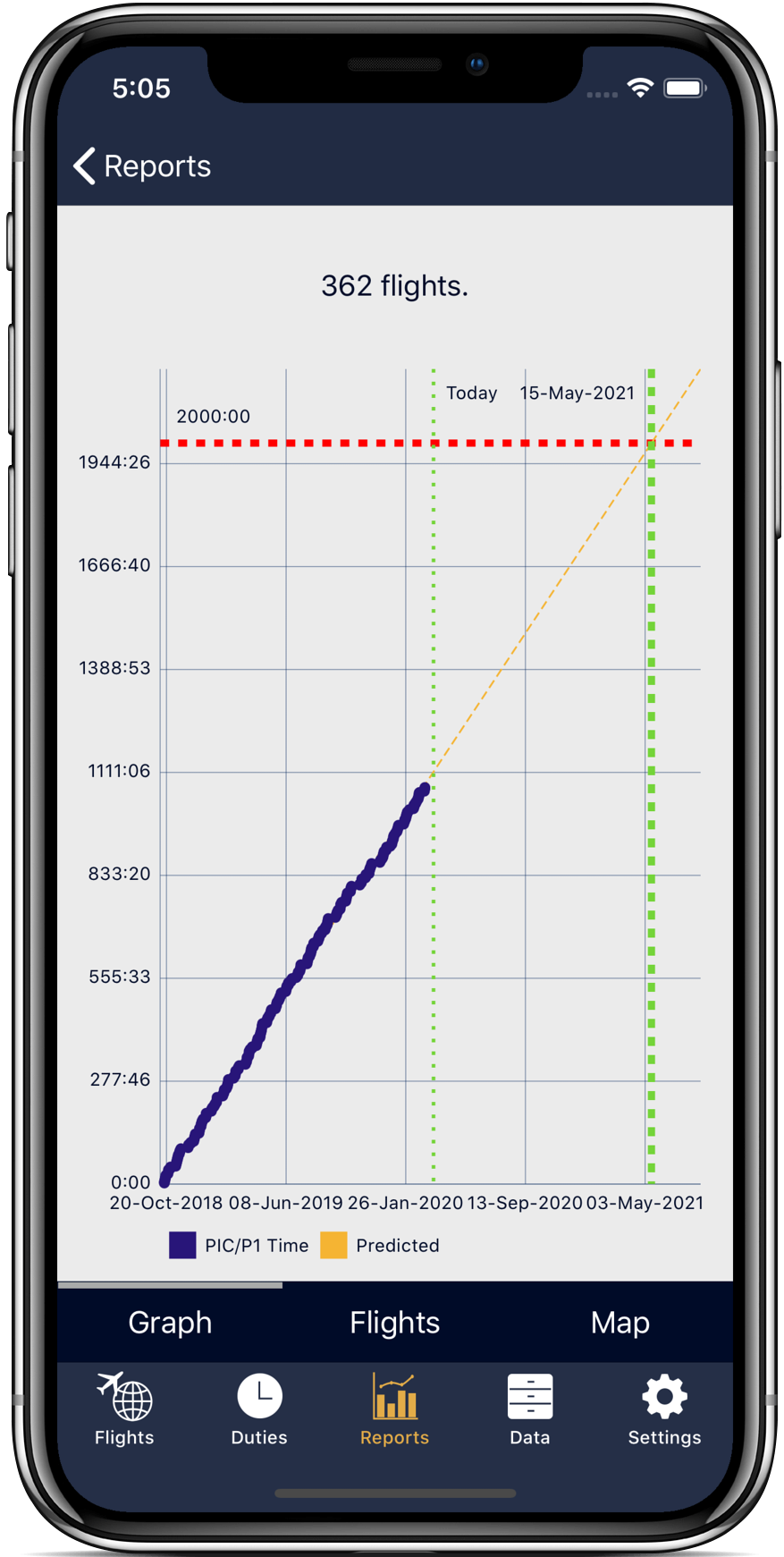 AvionLog's rolling reports are great for rolling periods such as tracking 100 flight hours in a 28 day period. Create any custom rolling report you need and scroll back in time to see how close you came to that limit.

If you haven't already chosen your favorite logbook PDFs you can do so by clicking the '+' and choosing Paper/ PDF Logbook. Tap each logbook you want to use and select 'Done'. You can change these selections at any time.

If you want to preview the logbooks, click the 'i' to the left of any logbook name.

On the reports page, click on the logbook you want to generate, choose the date filter based on one of the AvionLog presets or use a custom date range. Share your logbook by tapping the export button at the top right corner.

Signatures in flights are exported to the PDF and are accurately scaled to fit the comments section along with the name and credential information of the person who signed.

See how AvionLog can work for you!

Next Feature: Import your flights to AvionLog quickly and all in-app.

Stay up to Date

Get the best out of the AvionLog pilot logbook app by signing up to our newsletter.